I’m a musician who used to play in a band a lifetime ago. I still play my guitar and, of course, I still love music. Oddly, I rarely listen to music in the car. I think it conflicts with the car enthusiast in me—I want to hear the engine and exhaust… and music. It seems the engine and exhaust always win.

In fact, the engine and exhaust won in such a big way that I actually removed the stereo from my Boxster and replaced it with a shelf, thus enabling me to remove the center console for more legroom.

You see, the Boxster I own was the most bare-bones-basic Boxster one could possibly buy at the time. It literally had no options. When it was new, it was the one car on the lot that was actually priced at the “starting price” as advertised by Porsche. That means it has a cassette player, and only two speakers in the dashboard. Two, tiny, poor quality, 4-inch speakers that you can’t even hear when driving with the top down… or when the top is up, for that matter.

The 996 is different. This car was part of the Porsche Exclusive Program; it was custom ordered in 2001. It has loads of options; one of them being a better stereo. The original owner didn’t opt for the best stereo Porsche had to offer, but he also didn’t choose the cheapest. So, I’d really like to enjoy some music from time to time while driving my car. But that’s really a moot point now as the second owner of this car gutted the stereo system and replaced it with an utter mess of after market components.

What I fail to understand is why. To begin with, the stereo was replaced with a garish silver Clarion head unit, so it stands out in the black interior. He removed the Porsche amp and replaced it with a gigantic Phoenix Gold Tantrum that’s at least 2.5 feet by 1.5 feet and probably weighs 50 lbs. He mounted that to a piece of plywood that he hid behind the carpet in the frunk. He then added an Alpine CD changer and two MB Quart crossovers. There’s also an Alpine navigation unit under the passengers seat with the navigation antenna sitting on a piece of metal that’s essentially glued to the leather dashboard. Oddly enough, there’s no navigation display anywhere in the car.

I took the 996 in to have most of this removed. The Phoenix Gold amp, Alpine navigation unit and antenna, Alpine CD changer, and the Clarion head unit are being removed. The MB Quart crossovers are being relocated under the passengers seat. We’re also removing the 15+ year old half-ass built-in radar detector. I might replace that with something better, but not right now.

The Porsche Classic Radio Navigation system is being installed in place of the Clarion. There’s a number of antennas that come with the PCRN, such as navigation and SiriusXM, which will be installed in the place Porsche designed for them to be installed—underneath the plastic piece at the bottom of the windshield where the wipers are located.

On the left you’ll see an after market speaker that was just sitting in there, hot-glued into place. You’ll also notice that the tweeter, while still there, has its cables cut and just freely dangling around while not connected to anything. On the right you’ll see a tiny tweeter that doesn’t fit in the big opening so they mounted it on a metal bar. Again, keeping the original tweeter there but not connecting it to anything while its cables just freely hang. 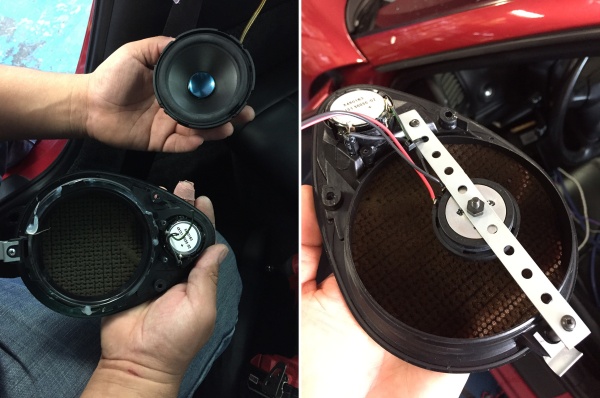 That means new speakers. Like I noted above, it baffles me. You have a car that cost $80,000 when it was new, and it’s been kept in such beautiful condition. But you think replacing the factory stereo components with cheap after market components held in with glue is an acceptable option? What goes through people’s minds?!?!

There were a few other minor things discovered too, such as certain interior panels of the car weren’t fitted properly. These are tell-tale signs of a lazy installer who probably charged a fortune for a hack-job and the owner never noticed. Of course, this kind of thing caused a big delay and my installer wasn’t able to finish the car. However, it will be completed tomorrow.

In my next post, I’ll give you some before and after shots so you can see the difference for yourself. My 996 will be back to a classic, factory look, but have all the modern functionality I could possibly need.